Use This Simple Contact Form to Get in Touch! 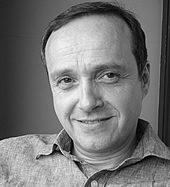 Hussein is a consultant, facilitator, and mentor for business leaders. Drawing on his extensive business experience, he has the skills to listen, question, challenge, and support leaders through the continual change process, in a way that is both systematic and creative.

Since 2002, Hussein has helped start, or develop a number of businesses in different industries; including retail, wholesale, commercial real estate and software development. With 25 years in his and other companies, he has learned that, in order to succeed, businesses —like all other endeavours— need a clear purpose and the structure to support that purpose.

He believes “it’s seldom that people are wrong for their jobs, usually it’s that the systems are not appropriately designed in the first place, so that people’s efforts don’t achieve the desired results”.

Hussein’s first enterprise was in computer products. Under his leadership, the company became a $100 million concern and had over 100 employees. The company was acquired by a German Fortune 500 company. Hussein remained group MD for 4 years, involved in mergers and acquisition activities enhancing the portfolio of the corporation, an area, in which his strong background in strategic finance became invaluable. Much of his exposure in the course of his corporate work was about design and redesign of company structures, which led him to the work of Peter Senge, Robert Fritz and other System-thinkers.

A director of Enthum, Hussein studied in Europe and Canada, and has an MBA, an MSc in financial economics and a MAS in corporate finance. As an economist he has focused on Banking and Finance and writes articles relating to these topics. He also loves music, and is an accomplished classical guitarist.

In more recent history Hussein focuses on organisational  constellations. He has trained with John Whittington at Coaching constellations and at the Schumacher College in Devon. As a musician he often compares systems to a musical orchestra. It sounds wonderful when each player knows their role in the system and all are in service of the music that is being performed. It is no different for Organisations.

As a bi-lingual consultant, Hussein works with companies in English and German speaking environments.

"Hussein’s approach was unique in that he has the skill set to deal with complex issues of company law and share structure, as well as finding a fair, well thought through and balanced approach to the more sensitive issues of management and personal relations.

This is a very holistic approach and its rare to find Hussein’s level of business expertise and experience in a training organisation."